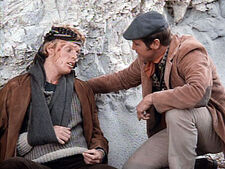 (Right click the image to save this episode to your computer.)

When the wife of the UN Consul to the Dominion of Balinderry is kidnapped by rebel forces, it's up to Steve to save her.  The rebels have threatened to kill her if a group of political prisoners are not released and the government of Balinderry will not negotiate with terrorists.  Paul and John are joined by Alex Green, webmaster of The Six Million Dollar Blog to discuss this episode.

Alex Green was born in San Diego where he has lived his whole life, rarely venturing outside the safe confines of Southern California. Growing up, his parents tried to persuade him that the funny manrunning in slow motion on the television wasn't worth watching, but he knew better. He knew much, much better.

A lifelong fan of The Six Million Dollar Man and The Bionic Woman, Alex hadn't been an adult for very long (some would say he still isn't) when he started making several trips a month up to Los Angeles to attend toy and collectibles shows in order to amass a huge collection of Bionic memorabilia. A vast collection that he no longer possesses due to an accident involving a pencil, a rabid weasel and arapidly descending elevator (Actually, the advent of eBay in the late 90's took the thrill of the hunt out of it for him, so he gave it up).

Currently working out of his modest two-bedroom apartment (or twelve-bedroom mansion as he refers to it when describing his digs to people who’ve never visited him at home), Alex is a free-lance web designer and the webmaster of The Six Million Dollar Blog. The newest Bionic site on the web except for all the others that have come after. He hopes one day to meet his hero Lee Majors in person and his biggest regret in life is that he no longer fits into his Six Million Dollar Man jammies.