The Bionic Woman, Part One 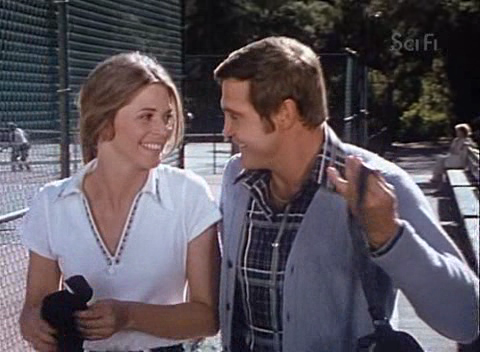 Steve returns to his hometown of Ojai, California in order to settle down.  He purchases a ranch that he loved as a kid and is reunited with his parents who help him with setting up house.  He learns that his high school love, Jaime Sommers, fifth ranked tennis pro, is visiting Ojai as well.  The two rekindle their friendship and romance.  Things are looking good until Jaime is horribly maimed in a skydiving accident.  Steve convinces Oscar to rebuild her using the same cybernetic technology that saved his life.  It all looks great for the world's first bionic woman, except that the shadow of Joseph Wrona, the Onassis of Crime, looms over them and their pending nuptuals.  Joining John and Paul to discuss this episode are James Sherrard of Bionic Woman Files and Betsy Dodd of The Bionic Blonde. Special thanks to Robin Spanell for the audio recording of the promo used at the start of this episode.  Check out Robin's music at Shatner's Hairpiece.

Comment on the episode here or write abionicpodcast@gmail.com or call 888-866-9010 or better still use the "Send Voicemail" tab on the left of the page to leave a message via your computer.  Take a moment to rate the episode by using our star system at the bottom of this entry.

James Sherrard is a first generation fan of The Six Million Dollar Man and The Bionic Woman. A collector of all things Bionic as a child, his interest in the shows was reignited when the first Bionic reunion movie was produced in 1987.The following year he met stars Lindsay Wagner and Richard Anderson for the first time through Lindsay Wagner’s Official Fan Club. In 1998, James reworked the Bionic Woman episode guide booklet that he had produced for the club into The Bionic Woman Files website…the longest running Bionic Woman site on the web! Over the years, James has contributed his Bionic knowledge to various books, articles, websites, and television productions. He has also amassed an amazing collection of Bionic memorabilia, from common toys to one-of-a-kind production items. Most recently, James has contributed to the 2010 DVD releases of The Bionic Woman Season One and The Six Million Dollar Man: The Complete Collection. James resides in New York where he is employed by a non-profit organization.

Growing up in a one-TV household, I had 3 brothers who surrounded me in age—who often teased me for being a “sissy”—and who usually controlled the voting majority for which channel to watch. Back in the 70s, our whirling TV dial was pretty much destroyed because we fought over it so often. One night while the substitute pliers were pointed to their choice of The Six Million Dollar Man(again), suddenly there was OMG ...cue angelic chorus... Jaime Sommers, the world’s first Bionic Woman. Yes!!! Score one for us sissies! I was totally hooked. And the love story between Jaime and Steve was the best. Ever. But then they killed her the following week.

Why did I idolize Jaime Sommers so much? Just as the final season was being released on DVD in the fall of 2011, I stumbled onto some internet bionic fan forums and started posting these offbeat episode reviews. I’m not sure, but when some members encouraged me to go start my own blog, I think it may have been the equivalent of being politely shunned by the Bionic Amish community— puritans of the franchise. (Really, I’m kidding. They’re all fun people and super nice. And they even let me use electricity to sign onto the internet.) Once about ten years ago, I belonged to an online fan “cult” that was framed in a similar style of farcical humor about The X-Files, so to me, this is all a completely normal approach to a television drama.

These days, I am a freelance copywriter, graphic designer and video editor living in Tennessee. No, I am not a blonde, but I am threatening to become one soon if these little gray hairs don’t stop surfacing. I must confess I also did not actually keep a diary in the 70s, but wish now that I had, so I could remember the real reason why I missed so many episodes of my favorite 70s show. For now, I’m blaming my brothers. For everything.